Check Your Mouthwash And Toothpaste Ingredients 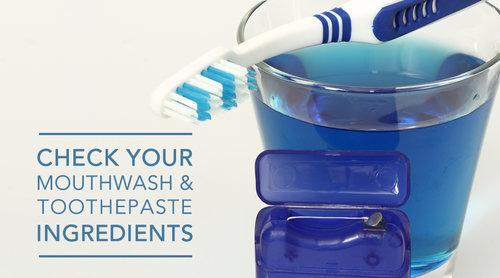 Today’s blog may sound like a chemistry test. We’ve noticed some patients coming in with brown spots on their teeth. Some mouthwashes can cause this type of staining. This is due to a chemical called chlorhexidine gluconate — an antiseptic designed to reduce bacteria and remove plaque. If you or your child have brown spots anywhere on the teeth, schedule an appointment at our dental office in Broken Arrow.

The problem is that when regularly exposed to the teeth, this chemical, chlorhexidine gluconate, can cause brown patches on the enamel because of a chemical reaction. Some ingredients in toothpaste, such as the foaming agent sodium lauryl sulfate, can interact with the fluoride in mouthwash, and deactivate it so that it loses its effect. For this reason, you might want to wait at least half an hour after brushing before sluicing with mouthwash.

Chlorohexidine can produce tooth staining within about ten days of usage because it reacts with food additives which may be left on the teeth, particularly tannins, found in Coca-Cola, tea, coffee, and red wine. If, for example, someone has gingivitis (inflammation of the gums), then it is important to keep plaque levels down, as this can make the inflammation worse. Dr. Owens may suggest a two-week course of a high-fluoride mouthwash such as Corsodyl to help reduce the risk of further decay. There is also a condition called acute necrotizing ulcerative gingivitis, which is an acute infection of the gums. A prescription mouthwash called Peridex contains oxygen which can counteract the microorganisms that cause this problem. Peridex also has a lower concentration of chlorhexidine than Corsodyl.

If you don’t have any dental problems, Dr. Owens suggests using an alcohol-free mouthwash brand. To avoid tooth staining, he suggests products which contain cetylpyridinium chloride (CPC) rather than chlorhexidine — both chemicals act as an antiseptic, but CPC won’t stain.

Many of the active antibacterial ingredients in mouthwashes require the presence of alcohol to exert anti-plaque effects and help to prevent gum disease. Chlorhexidine is the “gold standard” antibacterial and is often advised by dentists for acute flare-ups of gum disease to control the symptoms.

Bottom line…chlorhexidine mouthwashes are not recommended for long-term use since they do have the side effect of staining. While Dr. Owens can remove these brown stains, you could avoid the issue by using short-term or using a mouthwash containing CPC instead.