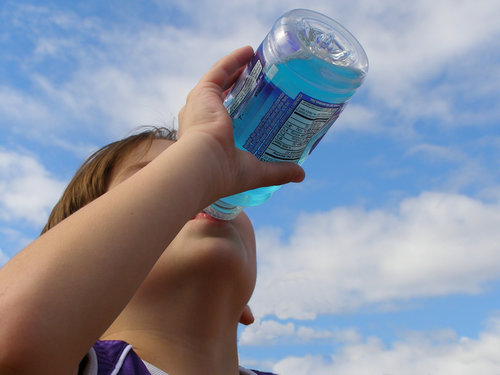 A study published in General Dentistry magazine found that an alarming increase in the consumption of sports and energy drinks is causing irreversible damage to teeth, especially among adolescents. The high acidity levels contained in the drinks literally erode tooth enamel.

Youngsters consume these drinks assuming that they will improve their sports performance and energy levels. And parents typically believe that they are a healthy alternative to soda. The reality is that these drinks are essentially bathing your child’s teeth with acid.

Researchers examined the acidity levels in 13 sports drinks and nine energy drinks. They found that the acidity levels can vary between brands of beverages and flavors of the same brand. To test the effect of the acidity levels, the researchers immersed samples of actual tooth enamel in each beverage for 15 minutes, followed by immersion in artificial saliva for two hours. The testing simulated the same exposure that a large proportion of American adolescents are subjecting their teeth to on a regular basis when they drink one of these beverages.

With a reported 30 to 50 percent of U.S. teens consuming energy drinks, and as many as 62 percents consuming at least one sports drink per day, it is important to educate parents and young adults about the downside of these drinks. Damage caused to tooth enamel is irreversible, and without the protection of enamel, teeth become overly sensitive, prone to cavities, and more likely to decay.

Most parents don’t realize that something as seemingly harmless as a sports or energy drink can do a lot of damage to their child’s teeth.

What’s a parent to do?

Suggest your child chew sugar-free gum or rinse their mouth with water following consumption of the drinks. Both tactics increase saliva flow, which naturally helps to return the acidity levels in the mouth to normal.

Also, patients should wait at least an hour to brush their teeth after consuming sports and energy drinks. Otherwise, they will be spreading acid onto the tooth surfaces, increasing the erosive action.

Dr. James and Samuel Owens typically suggest for children to dilute sports drinks with 50% water. Another alternative to soda that the dentists often recommend is the water flavoring packets. These limit their consumption of sugar.

The best alternative is to minimize your child’s intake of sugary or acidic beverages and instead promote drinking water.

If your child has been accustomed to drinking a lot of sports or energy drinks and may be suffering from enamel erosion or highly sensitive teeth, please call pediatric dentists Drs. James and Samuel Owens office at 918.455.7700.