Your Teen And E-Cigarettes 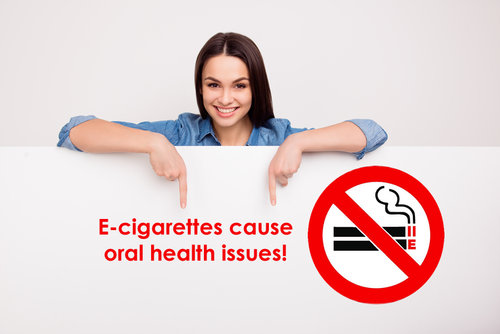 The misperception among teens is that e-cigs do not harm health. And teens are using e-cigarettes more than any other tobacco product today. This is according to a recent study which annually tracks substance use trends among 8th, 10th and 12th graders.

Flavors such as bubble gum and milk chocolate ice cream are attractive to younger teens. There has been an average of 10 new brands of e-cigarettes entering the market every month for the last two years, a recent Internet survey found. You’ve probably seen the anti-e-cigarette campaigns on exposing how they target young people.

The National Institute of Dental and Craniofacial Research is on a mission to better inform regulators, health care professionals and teenage and adult consumers of the increasingly popular battery-powered devices about the effects of e-cigarette aerosol mixtures on the mouth, gums and oral tissue.

While e-cigarettes do not contain tobacco, they do contain nicotine, propylene glycol, solvents, and flavors. Some schools have started to categorize e-cigarettes as drug paraphernalia and deal more harshly with students caught with e-cigarettes than those found with regular cigarettes.

E-cigarettes are battery-powered devices with a heating element, producing an aerosol or vapor that users inhale. Typically, the vapor contains nicotine and other contents which are proprietary and unregulated.

Here are some daunting statistics:

·       17 percent of 12th graders reported e-cigarette use and 14 percent reported the use of a tobacco cigarette.

You can learn more about how non-cigarette smoking alternatives affect a teen’s oral health from The American Dental Association. It’s a good opportunity to talk to your teen about e-cigarettes and the harms of tobacco use in general.

If you suspect or know that your teen is using e-cigarettes or have any questions about how this affects your teen’s oral health, please call pediatric dentists Drs. James and Samuel Owens office at 918.455.7700.